Here is the Milk Science. You decide….

Coming from a guy who was raised on a dairy farm in Wisconsin this article just may get my lynched. I’m going to tell you a little story and then show the science. It’s up to you to decide what’s right for you and your family.

All through school gas and stomach pain was a common issue for me. I didn’t think much of it really as I thought I was just a gassy person. I remember sitting at the state wrestling tournament one time waiting for my next match in so much pain I almost asked to be taken to the hospital. It wasn’t uncommon to fold over in pain but that day it was really bad.

Snoring was a big issue. I never said anything but I was self conscious staying places because my snoring was embarrassing. Gas, snoring, stomach pain, and diarrhea was just a part of life that I had gotten use to. I even had an inhaler because I’d have trouble breathing my sinuses were always so congested.

When I got to grad school and started learning more about how the body works, about nutrition, about genetics and evolutionary development I was forced to question the dogma of dairy being healthy. I was, and am a stubborn fool sometimes. I was being taught that dairy isn’t a good option for humans and I resisted it!

I’m from a Wisconsin dairy farm! Milk is a superfood! If we don’t drink it our bones will just whither away. Those were my beliefs because that was what I was taught. “Milk, it does a body good.” Or does it?

I started digging into it and the rest of this article shows what I found. Based on what I’ve found I haven’t had a glass of milk in well over a decade. I can’t remember the last time I’ve had any stomach pain. I no longer snore, I no longer have sinus or congestive issues. My bone density and strength is very high.

Now that was just my personal story. Who really cares what my story is, right? What does the evidence say? Here is what I’ve found. It’s up to you to decide what’s best for you and your family.

We will explore the dairy debate with the following evidence.

In the end you must decide for yourself which path to follow.

We have all been marketed to believe that dairy products are a super food. We have been taught that even if we don’t like dairy we must consume it or we won’t get enough calcium causing our bones to weaken and become brittle.  We have also recently been led to believe we need to consume yogurt to get adequate probiotics.

However, is there any research to support these claims?

You can expect that this recent introduction of dairy into our diet might cause some problems.

“Overall 75% of the world’s population loses their lactase enzymes after weaning.” This means that 75% of humans are lactose intolerant. Humans stop producing the enzyme lactase, which digests lactose, around 2-3 years of age; The time when humans are off their mother’s breast and should no longer be consuming milk/dairy products.

Think of all the wild mammalian species on the planet. Can you think of a single one that drinks milk other than from its own mother as an infant? Have you heard of any animal species that is calcium deficient or has weak bones because of lack of milk consumption? If no other mammalian species on the planet requires milk after infancy why would humans? I know. Other animals don’t drink coffee or beer either….If they did would it make them healthier? Of course not.

This means that you will get too much insulin in your blood after drinking milk just like after drinking high sugar beverages. This eventually leads to insulin resistance which increases your risk for obesity, cancer, diabetes etc…

This response is similar whether drinking whole or low fat milk. Think about how bad a typical morning cereal is. Most cereals are very in sugar which causes an insulin spike. Bathe that in milk which also causes insulin to spike and you have a terrible way to start that day.  A Mid-morning sugar crash are starving for more sugars.

Calcium supplements and the consumption of dairy products are commonly recommended to prevent osteoporosis and fractures.  However, research does not support these claims. 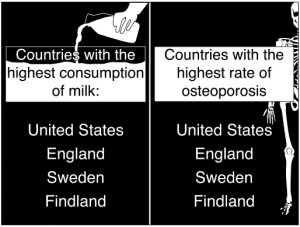 “The 1994 NIH Consensus Statement on Optimal Calcium Intake held that individuals who are sensitive to milk products or who avoid them for other reasons can obtain calcium from other sources.”                         Bertron P, Barnard ND, Mills M. Racial bias in federal nutrition policy, part 1: the public health implications of variations in lactase persistence. J Natl Med Assoc. 1999;91:151-7.

Other calcium sources would be green leafy vegetables like spinach, arugula, broccoli, kale, and collards. Folks, this is where we need to be getting our calcium! The key to healthy strong bones is lots of green veggies, vit D, and resistance training! Think about this. One of the biggest problems with space travel is actually bone loss in the astronauts. Is this because there isn’t enough milk or calcium in space? Without question one of the biggest causes of weak bones is the lack of resistance exercise.

“Various studies have associated dairy consumption with Type 1 Diabetes especially when exposed in the first months of life. These studies suggest that the early exposure to complex unnatural cow milk proteins may be a risk factor for beta cell autoimmunity.”

What this means is your body attacks the beta cells of the pancreas. These beta cells produce insulin and if destroyed Type 1 diabetes is the result.  Knip, M. Infant feeding and the risk of Type 1 diabetes. Am J Clin Nutr. 2010 may;91(5):1506s-1513s.

“Dairy products have frequently been implicated in the cause of Rheumatoid Arthritis (RA). Case studies have shown RA symptoms improve with the elimination of dairy and the symptoms markedly worsened with re-introduction of dairy products.”

Cow’s milk is designed for the rapid growth of baby cows (calves).  It is very rich in certain fats, proteins, vitamins, minerals, AND HORMONES that allow a calf to grow at a very rapid pace. Conventional milk may also include other chemicals such as growth hormones, antibiotics, synthetic vitamins, etc…

The European Union banned the use of Bovine Growth Hormone (BGH) but it is legal in all 50 US states and there is NO law requiring labeling of its use.

The use of BGH has been shown it increase mastitis (infection of the udders) in cows. What does this mean for you? Mastitis is from bacteria which cause infection or pus which is in the milk you drink. The pus is never filtered out. It is just pasteurized; aka cooked, so instead of getting live pus in your milk you get dead pus. YUMMY

The major sources of animal-derived estrogens in the human diet are believed to be milk and dairy products, which presumably account for 70-80% of the total estrogens consumed.

Betacellulin is a protein (growth factor) found in dairy products. Betacellulin binds to a human gut receptor called the epidermal growth factor receptor that is massively over expressed in many human cancers. Chronic milk consumption may lead to cancer.

Casein is the main protein found in cow’s milk and is concentrated in cheese.

“Casein has been shown to break down to produce casomorphin, an opioid that appears to act primarily as a histamine releaser.”  This is why allergic responses such as congestion and mucus production are so common with milk consumption. This mucus can cause difficulty breathing, as well as snoring. Acne is also a common result of dairy consumption. I have seen countless patients’ acne completely clear up just by cutting dairy from their diet.                  Kurek M.  “a naturally occurring opioid peptide from cow’s milk, casomorphine, is a direct histamine releaser in man”. Int Arch Allergy Immunol. 97 (2): 115-20

Casein is often labeled as sodium caseinate, calcium caseinate, or milk protein. The purpose of casein in foods is to enhance properties such as whipping and foaming, thickening, emulsification and texture, and to increase protein content. It is often found in protein bars, drinks, soups, ice cream, pastas, snacks and other packaged goods.

Casein has a molecular structure very similar to gluten.  They both react with opiate receptors in the brain, thus mimicking the effects of opiate drugs like heroin and morphine. No wonder it is so hard for some people to give up their cheese or pasta!

“Like gluten, casein from dairy has been implicated in autism, ADHD, schizophrenia, and other psychological disorders. “Millward C. Gluten and casein free diets for autistic spectrum disorder. Cochrane database of systemic reviews 2008, Issue 2. Ar. No.: CD00349.

Although more research needs to be done, the current evidence strongly suggests cow’s milk may be implicated in a variety of autoimmune diseases, certain cancers, some psychological disorders, as well as acne.

Despite being rich in calcium, the net effect of the high acid load, high level of phosphorous, high calcium magnesium ratio, and poor bio-availability, makes dairy a very poor choice as a source of calcium

Naturally a cow would eat grass which would produce calcium rich milk. Today’s cattle are fed grains which doesn’t produce naturally occurring calcium in milk. Milk then has to be fortified with a very poorly absorbed form of calcium. Think about that. Supplemental calcium is added to milk and then you are told you need milk to get your calcium!

Fortunately we live in a part of the world where we have a choice. We can choose to drink milk to get calcium and stronger bones (there is no evidence to support this theory). Or, we can eat fruits and veggies, meat, nuts, eggs, drink water and do resistance exercises. (Lift some weights!)

You have to understand this as it is so important. Just like you can’t sit around building stronger muscles by taking protein pills or protein shakes. You can’t build strong bones by sitting around taking calcium pills or drinking milk!

Wolff’s law states that bones in a healthy person or animal will adapt to the loads under which it is placed. Translation – if you want strong bones lift heavy stuff at every age!

Milk. Does it really do a body good….?

One last little note. Many times I’ve heard and read nutritionists say anyone that recommends eliminating an entire “food group” is crazy. Where did food groups come from? It’s a marketing term created by the United States Department of Agriculture in the 1950’s. Do you think the goal of that organization is to use sound research and develop the healthiest nutrition guidelines possible? Or, do you think the goal was to sell Ag products??