The Obese Dog That Saved My Life

I was sitting around with friends talking about the usual stuff and getting ready to have dinner. A car pulled into the driveway and the family lab Max, like many dogs do, got up to bark out the window. His bark was different though. It was labored and weak. Max was struggling to make a sound.

As I watched Max try his best to warn everyone of the incoming vehicle, I was struck by how fat he was. The dog’s gait was more of a waddle, he walked with a limp and looked like he was in constant pain. After a few attempts at barking he just laid back down, un-energized and defeated. I really felt sorry for the poor guy. That’s no way for an animal to live. Poor obese Max I thought to 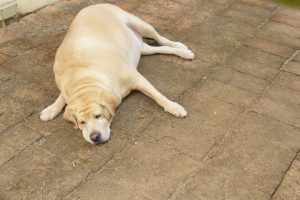 Later in the evening we all sat down for dinner; that was the Pavlovian cue for obese Max to get up from his sleeping pad. Throughout dinner I watched as he was fed bread, mashed potatoes, gravy, and pretty much everything else short of the soda and beer. It was quite appalling to see. That is not food for an animal I thought. It’s no wonder Max is in pain, limping, obese, and can barely bark a sound.

I asked about Max during dinner and his owner, Dave, said he doesn’t really exercise. Max doesn’t seem to have the energy to exercise. Dave said he’s just getting old.

When dessert came I thought no way. But sure enough obese Max was allowed to indulge in the sweet treats baked earlier that day. It’s not that Max was getting old. It was that “people food” was poisoning Max into a life of pain, immobility and lethargy. This poor, poor dog I kept thinking to myself. That’s no way to live.

Then it was my turn. I needed the table to push myself up from the chair. I felt like I had a pack of bricks on my shoulders as I struggled to stand up. My God, I was obese Max.

As we are sitting around watching the television Dave starts to talk about his recent medical scare. His blood sugar was so high he almost completely lost his vision. He was thankful for the medication to get it under control. The conversation progressed to where everyone was talking about their different ailments, aches, pains, medications, and upcoming doctors appointments.

As we are talking about all of our health problems, we are still tipping back our sodas and beers.

Dave struggled to get up and waddled into the kitchen to get another drink. He couldn’t help but grab a couple cookies off the counter. When he plopped back down in the chair obese Max struggled over to him. One of the cookies was for Max. Don’t give that to the poor dog I thought. It’s no wonder his life is so miserable eating all of this “people food.”

That was 2 years and over 100 pounds ago. Obese Max saved my life.

It was one new understanding that changed everything for me. I am an animal too. Humans are animals. “People food” is not food. Soda and any other sweetened drink is not meant for a dog, myself, humans, and especially children.

How could I be appalled when I see a dog eat a cookie and then eat it myself? And worse yet, give it to a kid? It is those simple decisions repeated over time that lead to the pain, disability, disease, lack of energy and low quality of life that obese Max was suffering through.

The more I thought about it the more insane it all became. I would NEVER give soda, juice, or any sugary drink to a dog. I would never give a dog desserts, pasta, animal crackers or mac n cheese. That is not what a dog or any animal is meant to eat. It’s terrible for them. And it’s terrible for humans too!

I remember getting diagnosed with high cholesterol and high blood pressure and the doctor telling me a lot of it is genetic as my parents were both obese with high BP and high cholesterol. What if I took obese Max to the vet? Would the vet ask about his parents? Would Max’s health problems be the result of bad genes? Would Max get medications or would it be advised to change his diet and try and get him more exercise?

I must admit this story is a story made of multiple truths.  It is not, however, one true story. I have sat appalled and watched miserable and obese dogs given “people food.” I have been even more appalled, much more appalled, watching as dogs are denied “people food” only to watch it given to a child. That is tragic.

How powerful is marketing where instead of being disgusted at the sight of a child drinking soda and eating chips we will almost feel guilty for depriving them of this short term pleasure “treat?” How can we see chicken byproduct nuggets, fries, and soda as a “happy meal” instead of poison you wouldn’t dare feed a dog?

I have watched kids try and feed chips to a dog only to be scolded by a parent. “No! That is bad for the dog.” How is it we will feed our kids what we wouldn’t give a dog? Could you imagine giving a dog juice, gatorade, soda or anything other than water?

I have also seen people, many people, cut the “people food” from their diet and start eating FOOD. I have watched as these people lose 100+ pounds, get off their medications, feel better, lose their pain, have more energy, improve their love life and relationships, and they just enjoy life more.

An even greater pleasure is the pleasure you get when you know you are nourishing a child’s body, creating health, improving their future outcomes, as opposed to just satisfying their taste buds.

Making the switch to a healthier diet is not as hard as it seems. I’ve done my best to make it easy for you. I created an easy to follow categorized list of what truly is “people food.” I also have for you my personal grocery shopping list. This is exactly what I buy just about every time I go grocery shopping. You can access both, for FREE, below.