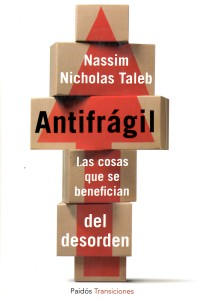 I read and I read a lot. Every time I read a book I highlight points that really stick out to me. I then go back and type out the interesting points to review in the future. It’s my own cliff notes library. I think these notes will be interesting to some and may even inspire people to read the book. Please let me know if you find this useful.

Book 2: Antifragile by Nassim Taleb – It’s not an easy read but it is choke full of interesting statistics and information. Here are the points of interest that really stuck out to me. Maybe they’ll inspire you to read the book.

Hydra – greek god who when one head is chopped off two grow back. That is antifragile. You cannot rise and rule without facing continuous danger – someone out there trying to topple you.

Difficulty is what wakes up genius – when given lemons make lemonade

Necessity is what sparks innovation. We are richer than ever but also in more debt than ever.

When speaking make the audience work to listen. Back ground noise can be good.

People want to read what they shouldn’t, read what is “banned” Criticism for a book is good marketing.

If you generate envy you will have enemies and people will hate you.

At the present rate one person is dying of diabetes every 7 seconds!

Iatrogenics – caused by the healer. One of the most common causes of death in America.

Until penicillin, going to a doctor increased your rates of death.

Ignaz Semmelweis – doctor who spoke of women dying more often in hospitals because doctors weren’t washing their hands. He was the laughing stock of the medical community and locked in an insane asylum. He eventually died of that condition, bed fever, and later found to be absolutely correct.

When you medicate a child for an imagined or invented psychiatric disease like ADHD or Depression, instead of letting him out of the cage, the long term harm is generally unaccounted for.

It is the loss of bone density that increases the rate of aging, diabetes, and for males loss of sexual function. Bone density is increased and maintained with resistance exercise.

There is rarely reward for non-action even if it this best option. Often doctors will opt for expensive back surgery as opposed to just letting it heal on its own.

In the US 6,200 people die every day. The media only talks about the most sensational or dramatic ones. In the massive media coverage over the measles outbreak in California there was not one death.

Invest in good actions and experiences, things can be taken away, experiences cannot

It is best to have some very loyal supporters even if you have a large number of people who don’t like you, than it isto try and be average.

“much of what other people know, isn’t worth knowing” what I was given to study in school I have forgotten. What I decided to read on my own, I still remember.

Socrates was put to death for his teachings.

Antifragility dispels the myths of balanced meals and amount of food types you should eat each day. It is healthier to have fragility in your meals.

The whole idea of exercise is to gain from the antifragility of workout stressors.

Half the population consumes less than 3% of health care costs. The sickest 10 percent consume 64% of the total pie.

He who does not have a past has no future

The non-natural needs to prove its benefits, not the natural. Example, telling someone to prove that smoking is unhealthy.

There is no evidence that shows a benefit of reducing swelling.

For a few hundred million years we’ve been eating saturated fats. We created trans fats and believe them to be healthier only to find that they are killing 100’s of thousands of people.

1940’s and 1950’s many children received radiation treatment for acne, tonsillitis, to remove birthmarks and to treat ringworm of the scalp. About 7% who received this treatment got thyroid cancer and died .

Now we should be afraid of the sun’s rays. Is it because the atmosphere is thinner, or people with lighter pigment have moved to sunnier locations, or companies need to make money?

Treating cholesterol with statins is like muzzling a crying baby, the muzzle does nothing to remove the cause of its emotions.

Evidence shows that surgery for sciatica, on average, had the same results 6 years later as doing nothing.

Heroin was developed as a morphine substitute for cough suppressants but did not have morphine’s addictive side effects.

Do you have evidence? When treatments go against mother nature it is on them to show the evidence it is wise.

Doctors will take the credit when a person gets well but will blame nature when things go wrong.

David Freedman showed very convincingly there is no link between salt consumption and HBP.

The fat free slogan is from elementary mistakes in date interpretation.

Telling people not to smoke has been the greatest medical contribution in the past 60 years.

Good comes from the absence of bad.

Fasting has been shown to extend life.

Those who studied the Mediterranean diet found they lived longer, a reason for this was their fasting. The greek orthodox church has about 200 days of fasting per year.

Breakfast is not the most important meal of the day. In fact it is unhealthy. We are supposed to spend energy to obtain our meals.

Die with pride and satisfaction of life.

A half man is someone who is afraid to take risks for his opinion. Gladiators volunteered to die. They wanted to be seen as tough.

Every opinion maker should have skin in the game…if you are for war, you should have a family member fighting in that war.

Never ask a doctor what you should do. Ask what he/she would do if in your place.

Companies have the incentive to provide the cheapest product possible.

Don’t do unto others what you don’t want them to do to you.

The burden of evidence falls on those who disrupt the natural.

Radiation hormesis (also called radiation homeostasis) is the hypothesis that low doses of ionizing radiation (within the region of and just above natural background levels) are beneficial, stimulating the activation of repair mechanisms that protect against disease, that are not activated in absence of ionizing radiation. The reserve repair mechanisms are hypothesized to be sufficiently effective when stimulated as to not only cancel the detrimental effects of ionizing radiation but also inhibit disease not related to radiation exposure (see hormesis).[1][2][3][4] This counter-intuitive hypothesis has captured the attention of scientists and public alike in recent years

Hormesis is a biological phenomenon whereby a beneficial effect (improved health, stress tolerance, growth or longevity) results from exposure to low doses of an agent that is otherwise toxic or lethal when given at higher doses. (That which doesn’t kill you makes you stronger)

Focus on simplicity – Simple can be harder than complex; You have to work hard to get your thinking clean to make is simple. But it’s worth it in the end because once you get there, you can move mountains.

Statins – For every 50 high-risk men aged 30-69 who take statins for five years, a cardiac event will be prevented for only one of them. In men and women with a moderately elevated risk, statins reduce the risk of CHD, but do not decrease overall mortality. In this population, statins also appear to increase the risk of developing other serious diseases such as cancer.

High blood levels of calcium are likely involved in the artery clogging process (atherosclerosis)99 because too much calcium may promote the formation and fragility of the plaques which block our arteries.