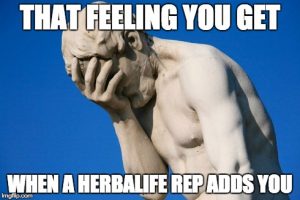 As the New Year Resolution season approaches, Herbalife supplements are popular in my area. I’ve had a lot of people ask for my opinion on Herbalife products, so here it is. It’s easier to point people to an article than give the same response repeatedly. Herbalife has a massive number of products, but I’ll focus on the first 3 to pop up on their page, which are the core products.

Now this is just a guess but I’m assuming if an Herbalife distributor approaches you, he/she will claim Herbalife has the  best products in the world. This person will have some great personal story on how Herbalife changed his life. He will most likely reference some old guy as the founder and face of the products. He’ll reference some science or medical advisory board (a.k.a. people who are paid to put their image and credentials on the Herbalife website, people who have not done a single outcomes study with the core products that I could find). Herbalife probably has some famous athlete they pay to promote their products.  This distributor will eventually try and sell you on the great business “opportunity” Herbalife offers. That Herbalife business opportunity was recently fined $200 MILLION…. yes that’s $200,000,000! He will probably keep that part hush hush.  In a nutshell, what you’ll get is the same marketing strategy that all Multi-Level-Marketing companies use. A bunch of personal stories, emotions, and fluff….no science or logic.  I’ll give you science and logic below starting with their 3 core products.

Let’s start with their meal replacement shake. FYI: The only thing you should ever replace a meal with is a healthier meal.

For starters, the only time people should really be taking a supplement is if they are not getting enough of a certain nutrient from their diet. Protein is easy to get in a reasonably healthy diet. I’m a 5’9″ 200 pound muscular guy, and I never take protein shakes. I encourage you to read this article where I explain why ,more thoroughly.

Herbalife uses soy protein because it is dirt cheap. Soy protein is one of the worst forms of protein you can buy. First of 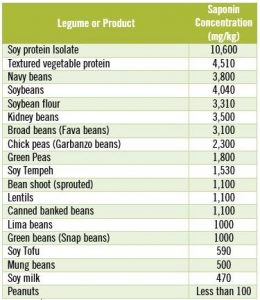 all, soy protein has the highest concentration of saponins of any food source. The term saponin is derived from the word soap. Saponins are anti-nutrients found in almost all legumes and have soap-like properties that punch holes in the membranes lining the exterior of all cells. The effect is dose dependent, meaning the more saponins you ingest, the greater the damage to your body’s cells. If legumes are eaten only occasionally,  saponin damage to the intestines will quickly repair itself; however, when legumes or soy products are consumed in high amounts as staples or daily supplements, the risk for a leaky gut and the diseases associated with leaky gut is greatly increased. Soy also contains protease inhibitors. Protease inhibitors found in soy are part of the reason why legume proteins have lower bioavailability than meat proteins. Protease is an enzyme that breaks down protein for absorption in your body. Protease inhibitors found in soy reduce protein absorption which is the whole purpose of taking a protein shake.  Add to this the fact that most soy is genetically modified so it will be sprayed with round up. Every plant around the soybean is killed but the soy soaks it up and lives on. Personally I choose to avoid consuming all round up ready foods. If you are an athlete or anyone else trying to increase your protein intake by supplementing with soy protein isolates, a much healthier strategy would be to eat more meats, fish, eggs, and seafood.  These protein packed foods taste a whole lot better than soy isolates, and are much better for your body and cheaper than these shakes!!

Next we have fructose, an added simple sugar. No explanation needed there.

Casein is often labeled as sodium caseinate, calcium caseinate, or milk protein. The purpose of casein in foods is to enhance properties such as whipping and foaming, thickening, emulsification and texture, and to increase protein content. It is often found in protein bars, drinks, soups, ice cream, pastas, snacks and other packaged goods.

Casein has a molecular structure very similar to gluten.  They both react with opiate receptors in the brain, thus mimicking the effects of opiate drugs like heroin and morphine. No wonder it is so hard for some people to give up their cheese or pasta!

“Like gluten, casein from dairy has been implicated in autism, ADHD, schizophrenia, and other psychological disorders. “Millward C. Gluten and casein free diets for autistic spectrum disorder. Cochrane database of systemic reviews 2008, Issue 2. Ar. No.: CD00349.

Canola oil is actually hydrogenated rapeseed oil. Rapeseed is not the best name for marketing purposes, so they changed it to canola oil which comes from Canadian Oil Low Acid. It’s usually a GMO which means more round up, and it’s a pro-inflammatory oil that I highly recommend avoiding.

Artificial flavors and Carrageenan – I think it is wise to avoid. Personally, I adhere to the “precautionary principle” for anything I eat; in other words, in the absence of proven safety, I choose to avoid foods that have questionable adverse effects.

I don’t think I need to go any further. This stuff is bad news. Can you lose weight with this shake? Absolutely. But you can also lose weight by only eating twinkies if you only eat a few a day. Weight loss should be healthy and maintainable. This is not the way to do it. 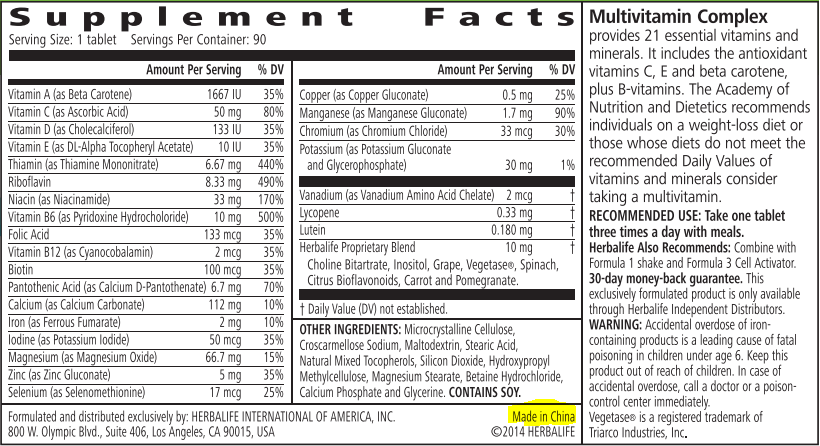 Okay. Now distributors are going to say how great this product is based on nothingness. I’m going to tell you this is an awful product because they use awful ingredients. 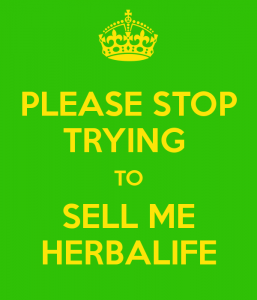 You have more of the unhealthy synthetic vitamers dl-alpha tocopherol and beta carotene which the studies I listed above have shown to hurt health, not improve it. I do not think it’s wise to ever take a multi with cheap iron in it. Don’t ever buy synthetic B12 (cyanocobalamin) or synthetic B9 (folic acid), get methylcobalamin and folate. This product uses the same cheap ingredients as the cheapest generic multi you’d find at Walmart. As someone who has formulated products and seen what ingredients cost, I’m telling you this multi would cost pennies to make. Based on the ingredients and the evidence available, I wouldn’t take this  multivitamin if I was paid to.

The last of the Herbalife core products is the Formula 3 Cell Activator which supports mitochondrial function. Pardon the language, but Fuck Off. It drives me nuts that these companies can give some good sounding bullshit title that means nothing. Prove it! Which cells are “activated”? How can you prove they are activated? How do you support mitochondrial function? What does that even mean? Show proof and if you are a consumer always ask for proof! Say you don’t want to hear any stories. Ask to see the evidence that shows improved health outcomes in people taking this product.

The only time you should take a supplement is if you are deficient in a nutrient and can’t get enough of that particular nutrient from your diet. The best form of any nutrient is the exact form that it would exist in nature. Always. How could it not be? The naturally occurring form is the way our bodies have been using it for hundreds of thousands of years. If you aren’t getting enough of a nutrient required for health, and you take a naturally occurring supplement that brings you  from deficient to sufficient, you are by definition healthier. That can’t be debated.

If you want to watch an entertaining clip on what a scam this “business opportunity” is, check out this video.

The best way to lose weight and maximize your health is through proper eating in proper portions. If you’d like to see my grocery shopping list and a basic plan of the diet I follow, you can get it HERE for free. If you just follow it, your health will improve.

Or you can listen to this. I explain exactly what to eat, why to eat it, and how much. It’s basically dozens of nutrition books crammed into a 70 minute audio program. You’ll learn a lot, get better results, and save a LOT of money.

Angry distributors – before you start firing off hate mail sending a bunch of personal attacks, as much as I enjoy reading them, don’t get mad at me. You were duped by clever marketing. It happens all the time. If you can find any evidence, not personal stories, but evidence to show these 3 products improve health I’ll gladly change my opinion.